The 'Most Expensive Hole in the World': Russia's Mir Mine Valued at Almost $17B 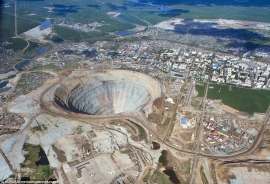 In an extensive article featuring spectacular images of ALROSA's Mir diamond mine, Britain's Daily Mail claims that it is so vast that helicopters are banned from flying over it in case they are sucked in. The Mir mine, located 5,000 miles east of Moscow, "creates a vortex potentially strong enough to suck helicopters into its depths," says the Mail while adding that the value of the diamonds so far mined at the operation together with estimated reserves come to £13 billion (almost $17 billion).

"At 1,722-feet-deep and with a diameter of nearly one mile, the crater makes it look like the nearby town of Mirny has been struck by a meteorite. Its riches were so vast it helped transform the [former] USSR from a war-torn and impoverished nation into a post-WW2 global superpower," the article reports.