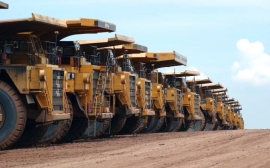 According to an article by mining.com, Anglo American's (AA) largest shareholder, South Africa's Public Investment Corporation (PIC), would prefer to downsize the company even further than was accomplished with AA's "radical portfolio restructuring" at the end of last year. The world's number five diversified mining company said it would cut around 85,000 employees and announced plans to reduce the number of mines it operates from 55 to as few as 16 to focus on diamonds, copper and platinum because of better long-term potential. Its nickel, coal and iron ore assets will be put up for sale. PIC, which manages state pension funds of more than $130 billion, meanwhile has grown its stake in AA to more than 13% after picking up shares earlier in the year when AA was worth less than $5 billion, down from a a peak of $70 billion in 2011. Reports are now surfacing that AA is resisting pressure to offload its platinum businesses, which if done would give PIC the option of bundling its other platinum interests into a new national mining company.

Apparently South Africa’s ruling ANC party is keen to use the state pension fund to set up a diversified mining business in order to win crucial public support, after it suffered a setback in elections earlier this month. Sources close to the discussions, however, suggested that AA's platinum business was not likely to be part of a sell-off, as chief executive Mark Cutifani wants mining the metal to continue to be one of the company’s three core businesses, along with copper and diamond giant De Beers. Mining.com cites The Australian - where, as it points out, "predictions of Anglo's demise is a popular sport" - which "speculates that 'carving out all the South African operations would reduce Anglo to a middling player focused on just two divisions - its highly coveted copper mines and diamond giant De Beers: If they did this, it would be the end of Anglo.' " AA's market value is up a remarkable 186% so far this year for a market capitalization of $16.1 billion on the back of stronger iron ore, coal and platinum prices.The platinum price is performing better than gold in 2016.