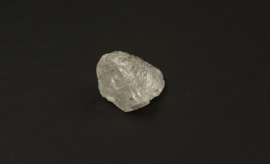 Russian diamond mining giant ALROSA has recovered a 136.24-carat diamond from the Nyurbinskaya pipe near Yakutsk in the Sakha Republic where most of its operations are located. The gem-quality rough diamond, is 3 Black Makeable 1 Color, measures 29.32 х 23.88 х 21.9 mm and is one of the largest found in the Nyurbin said in a statement. "The extracted stone is a combination-form translucent colorless part of a crystal with columnar interlocking sculpture. The stone contains graphite and sulphide composition.

The Nyurbinsky open-pit mine started operations in 2001. Identified reserves of the diamond deposit under JORC as of January 1, 2015, amounted to 36.9 million carats. In 2015, the pipe accounted for 13% of the ALROSA Group's rough diamond production. In the first half of 2016, diamond production grew 3% compared with the first six months of 2015.