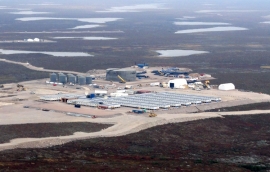 Mountain Province Diamonds Inc. reports that construction of the Gahcho Kué diamond mine was completed during the quarter, the first ore was introduced to the diamond plant on June 20, with the first commissioning diamonds recovered on June 30 and the ramp up to commercial production is underway with the mine is on track to achieve commercial production in January 2017. During the quarter ended June 30, the company entered into agreements with third parties for the valuation, sorting and marketing of its share of the diamond production from the mine. It expects to have its first sale of pre-commercial production diamonds during the fourth quarter and approximately every five weeks thereafter, the firm said in a statement on its financial results for the second quarter ended June 30. Mountain Province reported a net loss of $400,000 for the six months ended June 30 on net income of $18.4 million.

Mountain Province Diamonds is a 49% participant with De Beers Canada in the Gahcho Kué mine located in Canada's Northwest Territories. Gahcho Kué is the world's largest new diamond mine and projected to produce an average of 4.5 million carats a year over a 12-year mine life.