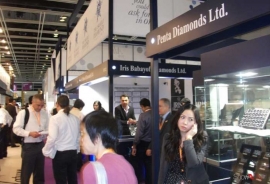 Diamond industry analyst Avi Krawitz presents his rundown of the India International Jewellery Show (IIJS) that took place last week in Mumbai. While noting that IIJS is currently a niche domestic show focusing on gold jewelry - which saw steady business, with jewelers expecting demand to rise along with gold's upward trend - Krawitz sensed optimism about the diamond market even though domestic diamond consumption has slowed recently. "India’s jewelry industry has some hurdles to climb before the diamond trade can grow domestic supply [and demand - DL]. But it appears to be on the right track." One cause for optimism is certainly the potential for growth in India's diamond market. “Indian consumer demand for diamonds has more than trebled over the past decade and India is today the world’s third-biggest consumer market for diamonds,” De Beers wrote in its Diamond Insight Report. “Yet this growth story is far from over. Rising incomes and aspirations could afford India’s diamond industry an even bigger prize over the next decade.”

Seizing this tremendous opportunity however, as Krawitz points out, will not be without its challenges. On the one hand, the Indian government has passed new tax regimes into law: first was the 1% excise duty on jewelry introduced earlier this year, sparking a 42-day strike by jewelers in April and May, causing them to miss the busy wedding season; and now the the Goods and Services Tax (GST), which parliament passed this week. "GST will incorporate a number of taxes," Krawitz explains, "including the excise duty on manufactured goods, the value added tax charged on product sales, a tax charged by service providers, and the 0.1% octroy applied to polished diamonds shipped across state lines into Mumbai." While GST is expected to simplify the country’s complicated tax system, Sabyasachi Ray [executive director of the Gem and Jewellery Export Promotion Council (GJEPC)] told Krawitz it presents unique challenges for the diamond and jewelry trade. Still, Krawitz came away feeling that most Indian diamond traders, "expect a decent season given there is some pent up consumer demand resulting from the strike ... Diamond suppliers were also encouraged by a memorandum of understanding signed by De Beers and the GJEPC to support generic marketing of diamond jewelry for the [Diwali] festival, which begins on October 30.