Global Diamond Production Down, Sales Up in H1 2016 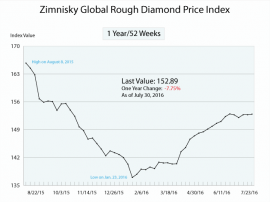 Paul Zimnisky, author of the Zimnisksy Global Rough Diamond Price Index, writes that the 2016 first half diamond production trends of De Beers and Alrosa - good for 40.7% and 34.7% of global market share value respectively - show diamond production declining as sales climbed significantly compared to H1 2015. These results are consistent with the strategies announced at the start of the year, and were certainly buoyed by a more favorable than expected global economy, the U.S. decision to hold back on further interest rate hikes and China's support for credit "which stabilized what had been a volatile 2015 for Chinese property and financial markets." Concerning the Price Index, rough diamond prices are down 7.8% over the last year, up 7.1% over the last 6 months, up 8.9% over the last 3 months, and unchanged over the last month.

Zimnisky writes that, "De Beers’ production volume in the first half of this year was down 14.8% YoY, consistent with the industry’s strategy to curtail diamond supply to the market in an effort to mop up excess stock in the mid-stream and downstream segments of the industry chain. However, De Beers' sales volume was up 29.2% through the end of June, a demand figure which is indicative that the supply strategy is working and that the industry’s excess inventory levels have been diminished." He adds that De Beers' latest sight showed a 160% increase in value sold over the same sale last year ($520M compared to ~$200M), "which is especially noteworthy given the seasonally subdued nature of diamond demand this time of year." De Beers' average price per carat sold in the first half of 2016 was $190, down 16.2% versus the same period last year, most likely a result of a lower-quality product mix sold as a result of a 17.1% and a 69.5% decrease in Namibia and Canadian production, respectively. These are the company’s two highest-diamond-quality producing divisions on an average price-per-carat basis. Noteworthy is that diamonds represented 42.3% of parent company Anglo American’s EBIT (earnings before interest and tax) versus 30.6% over the same period last year.

The same trend held true for Russia's Alrosa, whose production decreased 6.0% to 16.9 million carats in H1 2016 compared to H1 2015, though the company’s sales volume increased 20.6% to  $21.7 million in the period. Alrosa’s average price per carat sold in the period decreased 2.3% to $115/ct. Zimnisky adds a note on one of the smaller producers, Petra Diamonds, "whose production increased 30.7% in the first half of the calendar year, mostly attributable to the acquisition of a South African tailings operation from De Beers in January. Without the acquisition factored in, Petra’s company wide production still increased 2.8% in 1H 2016 over the same period last year.  Petra’s sales volume increased 21.5%, and the average price per carat sold by the company increased 8.5% to $129/ct., mostly attributable to a higher-quality production mix sold."