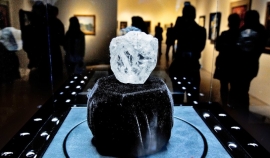 Lucara Diamond CEO William Lamb says the firm would not rule out offering exceptional diamonds at auction again in the future despite failing to sell the biggest diamond found in more than a century at Sotheby's in June. “We’re not discounting going back to the auction process in some form in the future,” Lamb told Bloomberg TV Canada in an interview. Lucara's 1,109-carat Lesedi La Rona diamond, found at its Karowe mine in Botswana, was expected to sell for $100 million or more but in the end did not reach its reserve price.

Lucara believed the auction format would significantly widen the net of potential buyers, but Lamb said it also put off diamond firms who did not want to have their bidding exposed. “I hate the word fail,” Lamb said. “What we attempted to do was to tap into a market which nobody ever attempted to do before.” Lucara aimed to discover if there was “an alternative source of money” in addition to the typical diamond buyer who values rough stones only for the kind of polished gem it could yield, he said. "We were hoping that there would be an investor who would want to own it for its historical significance.” Lucara discovered early on in the process that the diamond industry "hated" the public auction format. “The lesson is learned but that doesn’t necessarily mean we won’t go back” to the auction block, he commented.