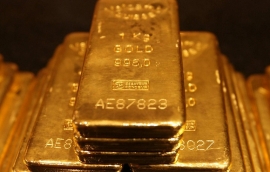 Analysts are "scrambling to increase their gold price forecasts, as the gold price continues to rise," the World Gold Council (WGC) said in a statement. The price of gold has again passed the $1,360/oz for a second time in 2016, a level previously seen in early 2014. The gold price has increased by almost 29% in US dollar terms so far this year (as of August 2). This has been gold’s largest continuous gain since the European sovereign debt crisis in 2010 and 2011.

"Gold has been one of the best performing assets so far this year, outpacing all major benchmark indices and with comparable volatility to stocks. It has also outperformed commodities such as crude oil, whose prices have plunged since the end of June. Amid expansionary policies, global bond yields are stubbornly low despite some minor adjustments. Gold analysts have increased their forecasts. UBS now expects US$1,400/oz for the end of the year, while Credit Suisse and Bank of America Merrill Lynch have it even higher at US$1,500/oz over the next 6 months. The median Bloomberg forecast for the end of 2016, based on 16 analysts, is 16% higher than it was at the beginning of the year," the WGC wrote.