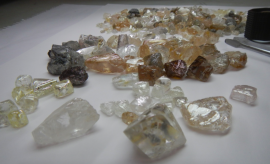 Lucapa Diamond Company, the Australian diamond miner operating at the Lulo Diamond Concession in Angola, announced a series of production records achieved in July 2016, most notable among which is the recovery of more (59) special diamonds ( >10.8 carats) in one month than in the entire previous half year (53). This led to a record-breaking total recovery of 3,164 carats for the month, and their largest single-day total (448 carats) ever. This banner month was possible owing to a record diamond grade of 15 carats per 100 cubic meters. Lucapa also recorded larger processing volumes than ever before, at 21,114 bulk cubic meters. The average stone size for July was an exceptional 2.0 carats, up from 1.3 carats at the half year.

The company announced that it sold a 1,985-carat parcel of Lulo diamonds in July, achieving gross sale proceeds of AUD$2.4 million ($1.8 million) representing an average price per carat of AUD$1,211 ($905). The diamonds sold were from production up to July 8, while its partner Sociedade Miniera do Lulo holds an unsold inventory of 2,440 carats from the July production, including 50 special diamonds weighing 1,057 carats. This inventory will be included in its next sale in August. Lucapa CEO Stephan Wetherall said the record recoveries and grades were the result of continued investment in its new earth-moving fleet and plant upgrades, as well as focusing on the high value Mining Block 8 diamond area.