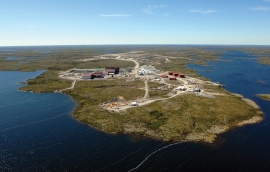 Diamond industry analyst Paul Zimnisky believes it is very unlikely that De Beers Canada will be able to find a buyer for its Snap Lake mine before the company floods it later this year. He said the main reasons were groundwater problems, lower diamond prices and a reduced number of diamond producers. "I don't see somebody buying it and turning it back on and producing at current prices," he told Canada's CBCNews. According to his data, rough diamond prices are only up about five percent since De Beers ended production at the mine last December.

Zimnisky believes that if a junior mining company does agree to purchase Snap Lake, it will likely do so under a "call out option" — acquiring and sitting on the mine simply in order to resell it once prices rise. Among the larger mining firms, BHP Billiton has left the diamond sector and Rio Tinto does not appear to want to expand its diamond assets. That would leaves only a small number of buyers, including Dominion Diamond Corporation, the owner of Ekati diamond mine and co-owner of Diavik. "I think there are probably better options out there for a company like that to make an investment at this point," said Zimnisky of Dominion.

Meahwhile, Ugo Lapointe, the Canada program coordinator for Mining Watch, commented that it would be better if the property remained with De Beers since the miner has the resources needed "to pay for cleaning up properly." If the mine does get sold, De Beers must vet the buyer thoroughly to make sure it has the money to clean up the project, added Lapointe. "Otherwise — we've seen it again and again, it's the public that has to clean up the mess."