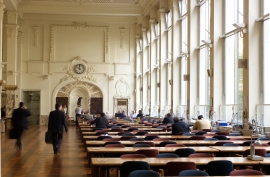 The Belgian Federation of Diamond Bourses (BFDB), the umbrella organization for Antwerp's four diamond bourses, has announced the names on the new Board of Directors for the respective bourses as well as BFDB's own Executive Committee. On October 8, 1893, the city's first bourse, the Diamantclub van Antwerpen, was established to promote and facilitate trade and industry in diamonds and other precious stones. In 1904, a group of Antwerp brokers and smaller traders who could not meet the Diamantclub’s strict admission requirements incorporated to create the city’s second diamond exchange, the Beurs voor Diamanthandel. It would be joined by the Vrije Diamanthandel in 1911, which included among its members diamond manufacturers from the nearby Kempen region, and the Antwerpsche Diamantkring, which was established in 1929 and would become the world’s only rough diamond exchange.

The new leadership as of 2016 is as follows: