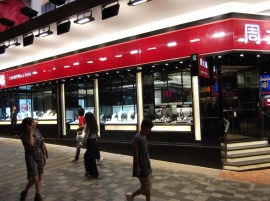 The Hong Kong-based jewelry retailer, Chow Tai Fook Jewellery Group Ltd., plans to expand in the U.S. market by selling diamonds to retailers via a wholesale business in a bid to offset the effects of the slowdown in sales in China that has seen profits drop. The world’s largest publicly traded jewelry chain plans to start the new U.S. venture within a year and has set up a team to conduct feasibility studies, said Chow Tai Fook Managing Director Kent Wong, according to a Bloomberg report. The company’s Hearts on Fire unit in the United States mainly sells its own-branded diamond jewelry to franchisees, however Chow Tai Fook will sell polished and rough diamonds to other retailers, he said. Rather than breaking into a brand-new retail market on its own, the new wholesale business will allow Chow Tai Fook to test the waters, said Wong. “We will seek to partner with local retailers who know the market well,” he said.

Chow Tai Fook bought Hearts on Fire for $150 million in 2014 in a move aimed at bringing the U.S. luxury diamond brand to mainland China, but has faced stiff challenges as the country’s economic slowdown and a crackdown on luxury gift giving slashed high-end consumer buying. The retailer saw net income slump 46 percent for the year ended March 2016, as Chinese tourists also began to shop elsewhere instead of in Hong Kong. The venture into the United States will not be easy, said Hannah Li, senior analyst in UOB Kay Hian Ltd. based in Hong Kong. “Their strategy reflects the jeweler’s lack of confidence in the Greater China market. The company’s not expanding into a familiar market but it’s considering a lower-margin, wholesale business in a new market where it needs a lot of time to expand its business networks.”