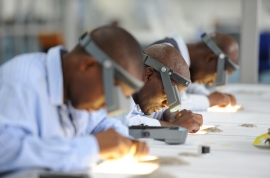 Botswana's Minerals, Energy and Water Resources Minister Kitso Mokaila told parliament that two of the country's cutting and polishing firms closed down at the end of last year leaving just 19 such operations. Local manufacturers have been hit by the value of rough diamonds supplied to them dropping by nearly half in 2015 due to Botswana's reduced output and soft global demand. Mokaila said the value of rough diamonds supplied to the local cutting and polishing industry dropped to $502 million in 2015 from $936 million the year before. He told lawmakers that the remaining 19 operational diamond cutting and polishing companies employ around 2,000 people. De Beers, which owns half of national diamond miner Debswana along with the government, reduced production last year in the face of a sharp decline in demand.