De Beers' Snap Lake Diamond Mine Up For Sale 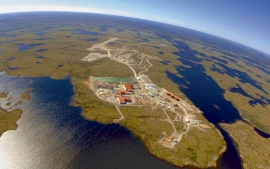 According to various news sources, Anglo American Plc’s De Beers has put its Snap Lake diamond mine in Canada up for sale after suspending operations at the unprofitable mine last December. Just recently the Canadian division of De Beers got approval to flood the mine tunnels, as part of a plan to reduce maintenance costs. The flooding has not yet happened but planning work continues. “Before we get into that actual flooding of the mine ... we thought it would be prudent, certainly, to see if there was an interest,” spokesperson Tom Ormsby said, adding the Bank of Montreal has been charged with marketing the underground mine in Northwest Territories.