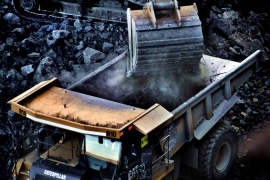 Gem Diamonds' first half figures for 2016 reveal that while carat production is currently tracking towards the top end of guidance for 2016 at Letšeng Diamonds in Lesotho - recovering 57,380 carats in H1 2016 (50,019 carats in H1 2015, a 12.9% increase) - average prices fell 16% to $1,899 per carat from $2,264 over the same period in the previous year - still among the highest price per carat in the world. Their statement reads, "The price achieved reflects the mix of diamonds recovered and fewer +100 carat diamonds, as mining worked through a lower value, but higher grade area during the period." The average grade increased to 1.72 carats per hundred tons (cpht) compared to 1.61 cpht over the same period in the prior year.

Gem Diamonds' CEO, Clifford Elphick commented: "There has been a modest recovery in Letšeng's rough diamond prices towards the end of the Period on a like-for-like basis. The average dollar per carat value achieved in the Period is a function of fewer +100 carat stones than usual being recovered as mining has worked through the lower value areas of the mine." Elphick also notes that, "The work on diamond damage reduction is continuing to produce results with an undamaged 160 carat Type II white diamond recovered during the Period and an undamaged 104 carat Type II white diamond of exceptional quality being recovered in early July."

At the company's more 'conventional' Ghaghoo mine in Botswana, Gem Diamonds has mainly focused on downsizing from the original production targets of 2,000 tons per day, improving efficiencies, processes and further progressing operational developments. Towards the end of the Period, mining rates improved and are currently at a rate consistent with the 300,000 tons per year target. Ghaghoo’s diamonds achieved an average price of $160 per carat during the first quarter and a subsequent average price of $155 per carat at a further sale in June. They note that the average $/ct has been impacted by an increase in the recovery of fine diamonds because of an improvement in diamond liberation in the mill.