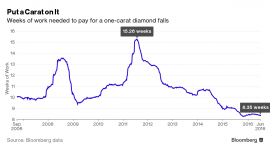 Lisa Du for Bloomberg: With the summer wedding season in full swing, the most important prop -  a diamond ring - is the leading issue for couples planning to tie the knot. A one-carat diamond costs the equivalent of eight weeks' salary, or about $7,300, for the average American worker as of last month. If that seems exorbitant, times have been worse: The number of hours of work it takes to afford the luxury good has trended downward in recent years and has fallen by almost half since 2011. Bloomberg constructed the statistic by comparing the price of a one-carat diamond against the average hourly wage for an American over about a 34-hour workweek — the mean office time for U.S. employees.