Rio Tinto: Output Up at Argyle in Q2, Plunges at Diavik 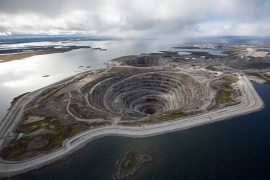 Rio Tinto reports that production at its Argyle mine in Australia was three percent higher in the second quarter compared to the corresponding period in 2015 following a continuing ramp-up of underground work which resulted in higher ore volumes processed which was partially offset by lower grades. Production rose to 3.489 million carats.

Meanwhile, at the Diavik mine in Canada's North West Territories, production plunged 26 percent in the period from the same quarter of 2015, reflecting lower grades, partially offset by higher ore availability. Second quarter carat production was 26 percent lower than the same quarter a year earlier at 948,000 carats and 16 percent lower than the first quarter figure, largely due to lower recovered grades and slightly lower ore availability due to a planned maintenance shutdown in the plant during the second quarter, the firm reported in a statement.