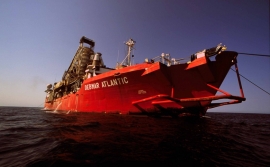 Discoveries of diamonds on land along Namibia's coastline in the southern Atlantic may extend ground-based mining operations by another 50 years, said the country's Finance Minister, Calle Schlettwein. Namibia is the world’s largest producer of marine gems. Namdeb Diamond Corp., jointly owned by the Namibian government and De Beers, came across diamond deposits after pushing back the sea wall at its land-based operations, Schlettwein told Bloomberg. “An additional resource has been now made available.  And with that, the life of mine from the land-based operations has been extended by another 50 years.”

Namdeb pushes back the sea by creating an artificial sea wall. This has led to recent discoveries made behind the inter-tidal zone, Schlettwein said. Namibia’s Atlantic coast area holds an estimated 80 million carats of gems, the world’s richest marine diamond deposits, which were carried to the sea by the Orange River and could be mined beyond 2050, according to De Beers. Schlettwein also commented on a 10-year deal signed with De Beers in May to get $430 million of rough diamonds annually for sale through the country’s Diamond Trading Co. He said the agreement would be improved further to Namibia’s advantage. "I don’t think it is the end of it, it is one step closer to our target of having better value-sharing," he said. Namibia is looking to produce jewelry locally “so that we can grow not only raw material, but all the components,” he said.