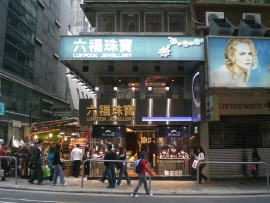 Luk Fook Holdings reported that the slump in sales continued in its first fiscal quarter due to a slowdown in Mainland China and low sales in Hong Kong and Macau. The firm last month reported that sales and profit tumbled for the fiscal year ended March 31. Same-store sales at self-operated locations dropped 24 percent over the three months that ended March 31, hit by a 26 percent plunge in gold sales and a 19 percent slide in gem-set jewelry from a year ago, Rapaport reported.

In China, same-store sales retreated 24 percent, with gold down 29 percent and gem-set jewelry declining 8 percent. Same-store sales in Hong Kong and Macau dived 24 percent as gold sales plunged 25 percent and gem-set jewelry fell 20 percent. The company opened 10 new self-operated stores during the quarter, taking its total count to 155 in Mainland China, 47 in Hong Kong, 10 in Macau and six in other overseas locations. Luk Fook also has 1,249 licensed shops in China and one in Korea, which were not included in the performance update.