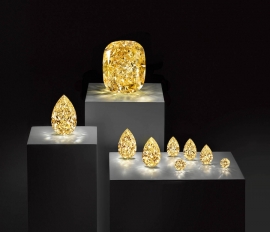 Several yeas ago, famed diamond house Graff Diamonds came across an opaque 299-carat rough diamond from the Letšeng Mine in Lesotho, owned and operated by Gem Diamonds. HauteTime traces the journey of the 299-carat rough fancy intense yellow diamond into the 132-carat Golden Empress diamond. "Before the rough jewel was cut," writes Roberta Nass, "Graff’s Senior Gemologists spend many months meticulously studying the nuances of the stone, and the risks involved in cutting it. With the study complete, imagination, exceptional skill and intense precision came into play. It was determined that one large-sized diamond could emerge from the rough, with additional smaller stones also being cut." She explains that colored diamonds are cut differently from white diamonds to ensure the cutter gets the fullest color saturation. It takes seasoned experts to bring out the color in stones like these.

Graff’s top cutters and polishers had to work a difficult balance of adding enough facets to let the light in, but not too many that the stone loses its fire and depth of hue. The cutting itself is a mathematical formula of angles and surfaces, while the painstaking polishing expertly lets the light shine through those cuts. Through this balancing act," writes Nass, "the 132.55-carat Fancy Intense cushion cut diamond - known now as the Golden Empress - was born. The rough stone also yielded another eight smaller, satellite diamonds: six pear-shaped Fancy Yellow stones, with the largest at 21.34 carats, and two brilliant round stones. Graff’s expert team of designers has since set the Golden Empress as the key pendant stone in a stunning yellow-diamond necklace."