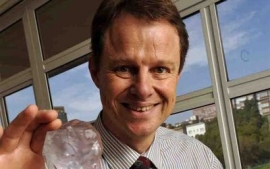 Canadian junior minor Rockwell Diamonds, which operate and develops alluvial diamond deposits in South Africa, reported a return to profit its rough diamond revenues leaped 41% to $9.3 million (C$12.1 million), and it reported an after-tax profit of $438,000 (C$570,000) during the first quarter of the fiscal year 2017. This is significant turnaround from a loss of $4 million (CAD 5.2 million) in 2015, which the company attributes mainly to the contribution of new production from Remhoogte-Holsloot (RHC) where better mining and processing volumes were achieved during the quarter. Beneficiation revenue was, however, down 56% to $310,00 (C$400,000) during the period under review from the $700,000 (C$900,000) realised during the first quarter of the fiscal year 2016. This brought the group’s total revenues for the period to $9.7 million (C$12.5 million) compared to $7.1 million (C$9.2 million) a year earlier. Average price per carat also increased by 27% on the previous quarter, jumping from $1,108 to $1,394.

Commenting on the first quarter financial performance, James Campbell, CEO and President, said: “Rockwell has begun fiscal 2017 with a significantly changed operational profile from just one year ago. Niewejaarskraal has been placed on care and maintenance, Tirisano sold, RHC acquired and, against most expectations, Saxendrift is still in production, albeit at a reduced rate and grade. Fiscal 2016 was a challenging time of change and restructuring. Our substantially improved results for the first quarter of fiscal 2017 reflect the benefit of the strategic interventions of late fiscal 2016. Enhanced productivity on our operations has resulted in improved diamond recoveries and diamond values, which have translated in increased diamond revenues, on both a year-on-year and quarter-on-quarter basis." However, he added, "We still have some challenging quarters ahead."

Concerning the market, Rockwell's view is that, "The outlook for the remainder of the year as we head into the summer season - which is historically a quiet trading period - should see some froth coming off the market, but there are no expectations for rough diamond prices to further reduce this year. The restrained supply by major producers and the proposed generic marketing campaign for diamonds by a Producers association has greatly assisted in maintaining the strength of retail markets."