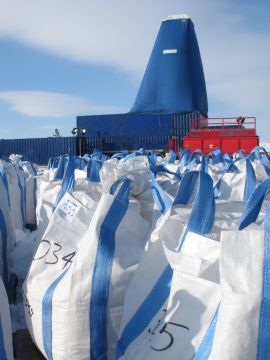 Peregrine Diamonds Limited announced the findings of an independent "Preliminary Economic Assessment (PEA) for the Chidliak Phase One Diamond Development Project" of the company’s CH-6 and CH-7 kimberlite pipes. Peregrine owns 100% of the 564,396 hectare Chidliak Project, where 74 kimberlites have been discovered to date, with eight currently being identified as potentially economic. The phase one development envisages an open-pit diamond mine with a mining life of approximately 10 years, producing first from the CH-6 kimberlite pipe and then from an open pit at the CH-7 kimberlite pipe. The volume of the mine’s resources is estimated at approximately 11.39 million carats at the CH-6 pipe and a further 4.23 million carats at the CH-7 pipe, this according to a Mineral Services Canada Inc. resource estimate of Chidliak.

Information from their July 12 conference call reveals that they left a few million carats in the ground that were not included in the PEA, according to chidliak.blogspot. This is due to a pit angle of between 35 degrees and 48 degrees as an input parameter into the pit shell creations, and that the strip ratio goes significantly higher the deeper one goes - the result being that an underground mine design of the pipe(s) must be considered at some point as this strip ratio gets too high. The other main information is that an all-weather road was clearly shown as the best option at Chidliak. The Nunavut Land group already have a proposed (draft) transport corridor along this all weather road route, and 100% of the capital cost of this road is included in the capital cost for this PEA (~30% of total capital cost). There were options of synergies on the call that wasn't mentioned before. The first one potential access to federal infrastructure funding. The federal government may help pay for the road. The second one is the sharing of the road by a potential Hydro Electric plant from the Energy corporation.