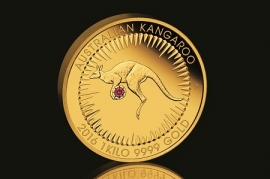 Rio Tinto has revealedl the world’s first coin to feature a rare red diamond from the Argyle Diamond Mine. Known as The Kimberley Treasure and for sale at AU$1 million (US$760,000), the incredible collectable has been crafted from one kilogram of 99.99% fine gold, and features a radiant cut 0.54 carat red diamond unearthed from Rio Tinto’s Argyle Diamond Mine in the east Kimberley region of Western Australia. The Kimberley Treasure is issued as legal tender under the Australian Currency Act 1965.

Simon Trott, managing director of Rio Tinto’s diamonds business said “We are delighted to collaborate with The Perth Mint on the exclusive release of this distinctive investment piece. It is a beautiful symbol of the unique treasures of Western Australia and sets a new benchmark in limited edition craftsmanship.”
The Argyle Diamond Mine produces a very small proportion of rare pink diamonds and an even smaller proportion of rare red diamonds. On average one carat of rare red diamonds a year is produced from the Argyle mine.