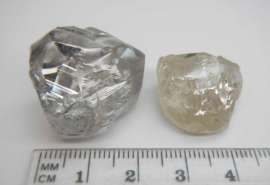 Lucapa Diamond Company, the Sydney-listed diamond producer and exploration firm, is in discussions to increase its stake in its 40%-owned Lulo diamond mine in Angola, reports Miningmx. Stephen Wetherall, CEO of Lucapa, said discussions were underway with partners Rosas e Petalas, a private Angolan company which has a 28% stake in the mine, and Angola’s state-owned diamond company, Endiama (32%). Endiama is considering either a cash sale for part or all of its stake, or a swap of its stake for equity in Lucapa Diamonds.

Investors in Angola’s diamond industry left in droves about a decade ago partly owing to Endiama’s insistence, before its new mining code was introduced in 2011, that it own a minimum 51% stake in any diamond mines. “That was a massive hurdle for foreign investors, but the new mining codes does away with that,” said Wetherall. “De Beers made it well known it is trying to get back into Angola. They have Angola prominently featured as area they are trying to get back in to." Wetherall also told Miningmx, “Alrosa is operating Catoca and they have been exploring in Angola and have identified in new pipe requiring some $800m in investment.” The Catoca mine, the world’s fourth largest diamond mine, is about 150km from Lulo, a 3,000 square kilometre concession in Angola’s Lunda Norte mine.

Lucapa says that special diamonds (+10.8 carats) account for more than 90% of their overall diamond revenues, with the average size of diamonds recovered increasing from 0.8 to 1.3 carats. They have recovered 53 specials thus far in 2016, highlighting "the unique large diamond nature of the resource and its future potential" to go with a "strong balance sheet". Lucapa today announced gross proceeds of $3m from the sale of two parcels in the second quarter ended June 30, which is equal to an average price of $1,132 per carat. For the first half year, diamond sales totalled $26.2m or $5,686 per carat. The average price excluding the 404-carat "4th February Stone" recovered in Q1 2016 is still an exceptional $2,421 per carat. The company has 1,219 carats of diamond inventory and is well capitalised with cash in hand at the close of the second quarter of about $10.8m.

Miningmx says the company has plans to double production at Lulo either by expanding the current plant facilities or establishing a new plant which would be positioned near a part of Lulo that yields particularly high value stones. “The latter is the most optimal,” said Wetherall. Establishing a separate plant would involve less capital expenditure and provide flexibility to the firm’s operations in the event of downtime at the existing plant. During the quarter, Lucapa and its partners formally signed off on a new three-year kimberlite exploration license. It has also ordered a state-of-the-art XRT large diamond recovery and sorting solution, allowing recovery of diamonds of up to 1,100 carats. This is the same technology Lucara Diamond used to recover the 1,109-carat Lesedi La Rona. Installation is scheduled for September 2016, when it will retreat the oversize material being stockpiled since the recovery of the 404-carat diamond.