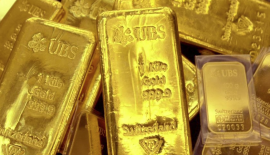 Gold hit its highest in more than two years on Wednesday as a drop in stock markets and a slide in some bond yields to record lows after Britain's vote to leave the European Union prompted investors to seek out bullion as a haven from risk, reported multiple sources. European equities fell and Germany's 10-year bond yield slid to a record low for a second day on Wednesday, as fears about the impact of Brexit on economic growth gripped global markets and underpinned demand for safe-haven bonds. Spot gold was up 0.84 percent at $1,367.12 an ounce. Earlier spot gold hit a peak of $1,374.91, its highest since March 2014. U.S. gold futures for August delivery settled up $8.40 at $1,367.10, and were last up $7.30 an ounce at $1,366.10, having hit $1,377.50, their highest since March 2014.

"Panic is back in the market," said LBBW analyst Thorsten Proettel. "You can see that not only in gold, but also with stock markets. Right now, everyone is looking for a strategy from London." Meanwhile, Business Insider reports that UBS strategist Joni Teves circulated a note to clients on Tuesday, stating that the price of gold will continue to shoot up in 2016, and has now "entered a new phase" of growth in the post-Brexit world, thanks to a variety of macroeconomic factors. The gold price has increased 24% this year so far. And the risks to the global economy will make it the go-to investment for the rest of 2016, she noted. Teves notes that she expects an average gold price for the rest of 2016 of roughly $1340, and in the short-term, gold will likely hit $1400 per ounce. The Wall Street Journal added that weak economic data from China only fueled that fire after the U.K.’s vote to leave the European Union.

In their "Industry Intelligence" report, Bonas Diamond Brokers & Consultants focused on the impact of the gold rush on European and Indian retail: "The major economic event, Brexit, which took place last week will have an impact on our industry, the extent to which remains unclear. The price of gold, as a safe alternative, increased by ~5% since then and is expected to continue to rise. This, as well as the falling sterling and a weakening euro will reduce the purchasing power of UK/ European based (diamond) jewellery companies and retailers. Also Swiss watchmakers fear that Swiss watches will be priced out of the market for the same reason." As for India, Just when Indian retail had stabilised post retailer strikes, gold prices have shot up, bringing any retail activity to a standstill."