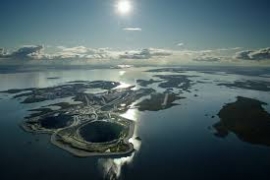 Despite recent news of a three-month shutdown and costly repairs to the process plant, Dominion Diamond Corporation will be forging ahead with development of the Jay Project at the Ekati Mine based on the positive results of a feasibility study and subsequent revised project schedule and life-of-mine plan. The project, which includes building a dyke, draining part of a lake and digging an open pit, will be funded from existing cash and internal cash flow. Without the expansion, Ekati would have run out of its existing reserves by 2020. Jay is the most significant undeveloped deposit at the Ekati Diamond Mine due to its large size and high grade.

Brendan Bell, Chief Executive Officer, stated: “The Jay Feasibility Study has confirmed the economic and technical viability of the large-scale, high grade Jay Project, which is the most significant undeveloped deposit at the Ekati mine. With a revised project schedule and updated mine plan, this positive feasibility study sets out a clear long-term plan for Ekati. We are very confident in the outlook for the diamond market and believe the mine life extension provided by Jay positions us well for the future ... Our strategy for the Ekati Mine is to develop new deposits in tandem with existing mining operations in order to increase the total value of the property."

Mining.com reports that the company said it would focus on developing its core assets in the Lac de Gras region of the Northwest Territories and on buying back shares. As part of the plan, Dominion also expects to begin construction of a fourth pipe at its Diavik mine, Canada’s largest diamond mine and one of the oldest, which it co-owns with Rio Tinto. They further report that that chief financial officer Ron Cameron would step down on July 15 and vice president Group Controller Cara Allaway would take over as interim CFO. Dominion is also selling its office building in downtown Toronto. That transaction, said the diamond miner, should be completed in the third quarter of fiscal year 2017.