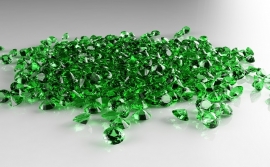 Gemfields has announced the finalization of four debt financing facilities for a total of $65 million, which are intended to provide financing for expansion plans to increase its ruby and emerald production. The loans entail a $45 million facility for the ruby operations, Montepuez Ruby Mining Lda, of which Gemfields owns 75%. The facilities consist of: $15 million unsecured overdraft facility entered into by MRM, with Barclays Bank Mozambique in April 2016; a $15 million overdraft facility entered into by MRM with Banco Comercial E De Investimentos, in June 2016, and; a $15 million finance leasing facility entered into by MRM with BCI in June 2016. The remaining $20 million concerns a financing facility with Macquarie Bank Limited agreed in May 2016, the security for which comprises a floating charge over the jewelry and cut and polished gemstones of Fabergé (UK) Limited and Gemfields.

Janet Boyce, CFO of Gemfields, commented: "We are pleased to have agreed these financing facilities after having considered a number of alternatives as well as other offers from various banks. The Facilities, together with Kagem's existing revolving credit facility of USD 30 million with Barclays Bank in Zambia, provides Gemfields with the necessary funding to sustain its growth and expansion plans to increase annual production to approximately 20 million carats of rough rubies in MRM and more than 40 million carats of rough emeralds in Kagem within the next 3 years. Lastly they also assist in smoothing the Company's cash flows given the intermittent nature of revenue in-flows from the coloured gemstone auctions."