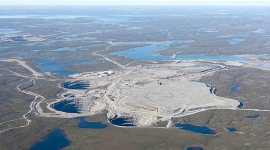 Following last week's announcement that the fire that occured at the Ekati Diamond Mine process plant on June 23 would force it to shut down for three months, Canada's Dominion Diamonds has lowered its 2017 production forecast by 16%: from 5.6 million carats to 4.7 million carats. Futhermore, it is estimating the cost of repairing the damage done by the fire at US$19.25 million. Dominion's media statement reads, "The Company is reducing operating costs and deferring some capital costs during the plant downtime. Mining activities continue at the higher value Misery open pit and Koala underground, and have been suspended at Pigeon and Lynx. The Misery and Koala material will be stockpiled, with the intention of processing a blend of the high value Misery Main and Koala ore when the process plant restarts."

Brendan Bell, Chief Executive Officer, stated: “We continue to actively manage this situation, and have implemented a prudent strategy to minimize the impact of this incident on our cash flow. We’ve planned mining activities to allow for the option to prioritize higher value ore sources on startup, thereby minimizing the impact on the value of our fiscal year production.” The announcement also states that, "Non-essential sustaining capital projects including mobile equipment rebuilds and the expansion of communication and automation systems have been postponed until fiscal 2018. A temporary layoff of approximately three months has already been implemented with an estimated impact on approximately 330 temporary and permanent contractors, and employees."