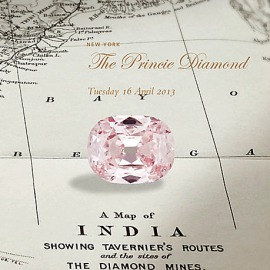 The Diamond Investment and Intelligence Center (DIIC) takes a look at the tactics of auction houses for promoting unique and high-end diamonds - particularly Fancy Color Diamonds - to maximize their value at auction. How do they attract their clients and what happens when, as we saw with the Lesedi La Rona just this week, a diamond fails to sell. They start out with the story of three famous diamonds, each of which "ended up adding a new chapter to its famous past" when it went to auction: The buyer of “The Pink Star” Diamond failed to pay; “The Shirley Temple” Diamond failed to sell; and “The Princie Diamond" became the centre of a legal battle. What happens then? How does the auctioneer guarantee and generate the highest value? And are their commissions justified?

Examining the case of the most topical stone - the Lesedi La Rona - DIIC writes that, "Lucara, together with Sotheby’s, tried to skip the full value chain and attempted to sell the diamond to a sophisticated investor. In reality, this diamond should have been offered like all other unique diamonds, to sophisticated dealers. There are only a handful of them out there that can afford such a diamond. In fact, we believe it would have been a collaboration of a few dealers together. Lucara lost 14% of its value, or  nearly $220 million in market value, but they are still up over 100% since discovering the rough diamond, even after the failed sale." Ultimately however, the diamond will still sell, the DIIC thinks it will end up selling "in the $60 million area", which they "believe is fair value when considering the extra risk the buyer will have in polishing such as stone, and selling it. There is the 10% that they will have to give to Lucara. This way will save the buyer over $8 million of commission," as it will be sold outside of the auction.