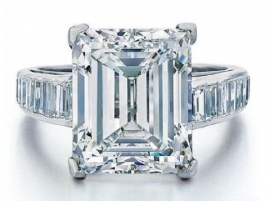 An anonymous buyer paid what was expected for the 7.45-carat emerald-cut Harry Winston diamond ring that once marked the union of Donald Trump and his second of three wives, actress and television personality Marla Maples, reports Michelle Graff for National Jeweler. The ring sold for $300,000, hitting the top of its pre-sale estimate. The couple was engaged in 1991 and remained married until 1999. They had a daughter together named Tiffany, after Tiffany & Co. In June 2000, Maples took the ring to Joseph DuMouchelle, where it sold for $110,000. Maples donated a portion of the sale proceeds to charity. The same person who bought the ring 16 years ago brought it back to Joseph DuMouchelle to be sold again.