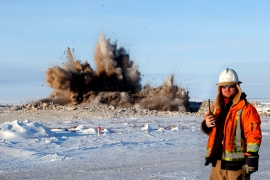 In an interview with Rapaport, Canadian diamond miner Mountain Province’s CEO Patrick Evans states that the company believes production at Gahcho Kué, is expected to start up in July and reach full capacity in eight months. The company hopes to plan a first sale in Antwerp, as early as September, via open tender handled by Antwerp tendering partner Bonas. Mountain Province, which co-owns with De Beers what is said to be the largest and richest of all new diamond mines, anticipates production will be around 1 million carats by year end, and an annual production of 4.5 million carats, of which 50% will be marketed by Mountain Province. Annual production in the first five years will be between 5 million and 6 million carats due to higher grades at the 5034 pipe, which will be mined first. In terms of sizes and qualities, Evans states they expect high-quality white diamonds with a good population of D, flawless stones; and a population of browns as well as potential for fancy yellows and a few pinks