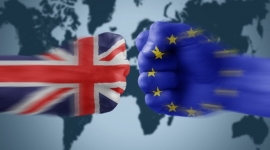 JCK News director Rob Bates looks at the effect Brexit might have on the diamond and jewelry industry. Bates identifies five potential impact areas. First of all, the vote to exit the EU increases uncertainty and volatility, especially on the financial market, and that is bad news for everybody. Secondly, gold prices are expected to go up, as investors consider it a safe haven amidst the financial turmoil. Furthermore, Swiss watchmakers fear Swiss goods will be priced out of the market (again) as the British pound and euro are losing ground quickly. Bates adds that in the long run, companies like the already tormented Signet and Tiffany’s might suffer significantly, considering their strong presence in the UK and the likelihood of a further increase in the US dollar.

Meanwhile, mixed reactions come from the Indian diamond industry, where GJEPC Chairman Pandya said there is "nothing to worry about as the industry trades in dollars, not euro’s or pound.” One trader commented in the Times of India that Brexit will certainly negatively impact the already suffering industry in India, considering the large amount of diamond companies listed on the London Stock exchange and the financial distress the exit vote is creating. Business Standard reports that despite the UK accounting for less than 10 per cent of India’s $40 billion of annual gems and jewellery exports, according to industry insiders import of rough diamonds to India would get impacted in long run, caused by a decline in purchasing of jewelry and the currency-sensitive nature of the diamond industry.