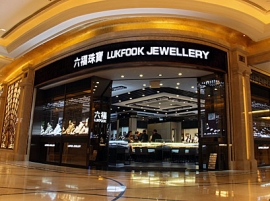 Hong Kong/Chinese jewelry chain Luk Fook Holdings is the latest to suffer from what Bloomberg is calling the "Chinese malaise" among Hong Kong retailers, as sales and profit tumbled for the year ended 31 March 2016. The company is among several major jewelers hit by the Chinese economic downturn and fewer tourists travelling to Hong Kong. The company's annual results for the year reads that revenue and profit attributable to equity holders reached $1.81 billion (HK$14.0 billion) and $123.9 million (HK$959 million) respectively, representing an 11.9% reduction in revenue and a 40.6% reduction in profit. The group’s Hong Kong sales fell 14% to $1.06 billion, making good on expections that profits would fall by a third. Meanwhile, another leading Hong Kong retailer, Chow Tai Fook, previously reported that its annual profit fell 46%, also in line with expectations.

Citing uncertainties in the global economy and China’s slowdown, Mr. Wong Wai Sheung, Chairman and Chief Executive of the Group said, “During the year under review, the continued slowdown in the economic growth in Mainland China, the tightening of Individual Visit Scheme Policy, the devaluation of currencies of popular tourist destinations and Renminbi, all imposed negative impacts on the desire of visitors to travel to Hong Kong and Macau. Furthermore, the disappointing performance of the property and stock market in Mainland China also affected the domestic retail market. The Group’s revenue for the financial year 2015/16 therefore declined. Moreover, with the adjustment of diamond price in accordance to market price that led to the decrease in gross margin of gem-set jewellery products, plus the continued increase in overall rental expenses and the profit in relation to the investments and  operating activities in Hong Kong Resources Holdings Company Limited and its subsidiaries turning into a loss during the Year under review, our profit attributable to equity holders for the financial year 2015/16 therefore reduced when compared to last year."