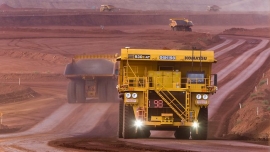 Indian mines secretary Balvinder Kumar has stated that India is seeking the participation of Rio Tinto and Anglo American's De Beers to explore for diamonds and gold, reports Reuters, a move it refers to as part of Prime Minister Narendra Modi's ambition to make the country a major mineral producer. Kumar said that the Indian government will start to auction the rights to up to 70 diamond and gold exploration zones to mining companies this year. India stopped producing diamonds years ago and produces only a small amount of gold, although it is the world's second-biggest consumer of the precious metal. Modi wants to revive the sector, with most of the exploration and production conducted by the private sector. We need resources to expand our mineral wealth and that's why we want private companies to carry out exploration of deep-seated minerals," Kumar told Reuters. "So far we haven't been able to do detailed exploration, but this proposal is a win-win for all."

However, he said diamond producers De Beers and Rio Tinto, which has already discovered a cluster of eight diamondiferous pipes in central India, are not enthusiastic about the latest exploration idea, citing high risks of failure. To allay those concerns, Kumar said the government will reimburse companies' exploration costs if their blocks do not throw up commercially viable mineral reserves. Companies that win the exploration rights will be able to transfer those rights to another party within three years if they wish, and the rights will then be auctioned again for actual mining. The exploration company will get a percentage of sales as royalty for 50 years from the company that wins the mining rights, if it does not participate or loses out. It will be the first time India has allowed private companies to just explore for minerals, with the mining rights auctioned separately. De Beers said it continued to engage with the mines ministry but had no current plans to resume any exploration in India.