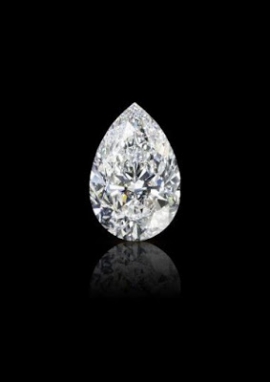 Graff Diamonds recently unveiled the “Graff Vendôme,” a 105.07-carat D flawless pear shaped diamond, named after its new store on Place Vendôme in Paris. The diamond was created from a 314-carat rough stone - called "The Destiny" - unearthed in May 2015 at Gem Diamonds’ Letšeng mine in Lesotho, which known for its exceptional stones, and sold into a partnership in June of that year. Anthony DeMarco writes for Forbes that, "Following 3D computerized mapping of the rough diamond, Graff’s master cutters took 'many months' to laser-cut and hand polish the gem. The resulting diamond is the largest cut and polished diamond of its kind in Graff’s history. An additional 12 diamonds were created from the rough with the largest being 17.10 carats and nine having D flawless quality, the highest color and clarity grading for a colorless diamond." The new Graff Place Vendôme boutique opened in early June and is located next to the Ritz Paris. It’s the brand’s first boutique in Paris.