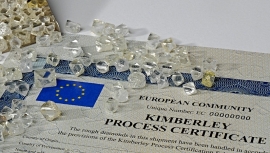 Kimberley Process Chair Ahmed Bin Sulayem has visited the Central African Republic (CAR) where he met President Faustin-Archange Touadera and Mines Minister Leopold Mboli Fratran. CAR resumed exports of rough diamonds earlier this month after a three-year ban when an internecine war broke out with both sides accused of using diamonds to fund their activities. Mining was is due to resume once other zones in the western part of the country are declared compliant.

In a statement emailed to Rough & Polished, the KP wrote that Bin Sulayem would tour the southern areas of Carnot, Boda and Nola. He will also conduct a workshop and town-hall meetings with local miners and traders. CAR President Touadera said that Sulayem's visit to CAR had brought hope to the country's “long-suffering” diamond industry. “Being able to see first-hand, what it means to our people and the effort they have gone to achieve this after three years is a real game-changer,” he said. “We look forward to fully integrating ourselves back into the international marketplace as soon as possible...”

Sulayem said that his visit enabled him to see not only what progress had been made at a senior level, but also “what it was like ‘on the ground’ now that the country had turned a corner. The people here are reliant on this industry - and the government is determined to work with the Kimberley Process at every level, to ensure they get it right, from the people’s perspective as well as from the government’s,” he said.