Love ‘Game of Thrones’ Jewelry? Collection Being Launched on June 30 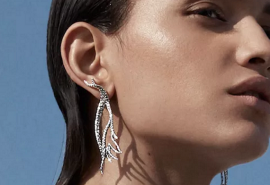 Some of the jewelry items worn by the Mother of Dragons character played by actress Emilia Clarke on the wildly popular Game of Thrones TV series will soon be available for fans of the show to purchase. The jewelry is based on a long-standing partnership between Game of Thrones costume designer Michele Clapton and London-based jewelry brand Yunus & Eliza, JCK reports. Fans will be able to buy a few reproductions of Clarke’s on-screen looks, along with a range of brand-new Game of Thrones-inspired styles.

A Game of Thrones fine jewelry collection, under the newly created Mey brand, is being launched on June 30. The 22-piece sterling silver collection features two items that appeared in season five and two additional items that will be seen on the Mother of Dragons this season. These include 'neck sculptures', statement-making bracelets, and stacking rings. Prices start at $100, with the intricate neck pieces costing almost $3,000.