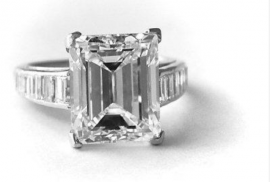 The owner of an engagement ring that Donald Trump gave to former wife Marla Maples is hoping the huge media coverage of Trump's presidential bid will help create extra interest in the sale at auction of the ring. The auction is being handled by estate jewelry auctioneer Joseph DuMouchelle, and the ring could sell for $300,000 or more. Trump proposed to Maples with the 7.45-carat Harry Winston ring in 1991. Maples put the ring up for auction following their 1999 divorce, where it sold for $110,000, which she donated to charity. The buyer will sell the ring at auction in New York City on June 29.