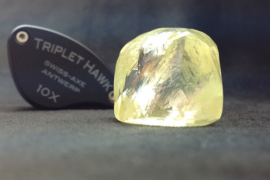 As a result of continuous improvement of mining throughput, Rockwell Diamonds has reported improved production and sales performance after a tumultuous quarter of the last financial period, with the volume of diamonds produced in Q1 (the three months ended May 31, 2016) up 32% compared to the first quarter of 2016 and up 7% on Q4 2016, "chiefly due to substantially higher volumes mined and processed at Remhoogte (RHC)." During the first quarter, Rockwell sold 4,880 carats of diamonds, up 3% from last quarter, at an average price of $1,864. This increased Rockwell’s value of sales by 31% from the previous quarter to $9.1 million, excluding beneficiation.

Rockwell chief executive James Campbell said the performance reflected the improvements the company had been implementing following the strategic interventions of the previous financial year. “Productivity has been enhanced on our operations with the result of improved diamond recoveries and diamond values," says Campbell. "While operations are continuing to wind down at Saxendrift, production at Remhoogte is now stabilising after a challenging third and fourth quarter ... Average per carat values at RHC increased by 32% to $1,864 per carat, owing to the recovery and incidence of larger stones which normally follows in turn to increased processing volumes. Our Middle Orange River sales are up 31% on the previous quarter and 67% on the same period last year. However, the demand for 10+ stones remained softer throughout the quarter, due to lower demand."