Lucara's 1,100-Ct Diamond Goes on Display at Sotheby's in London 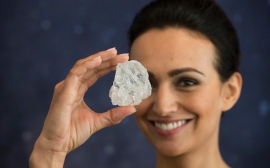 The largest diamond found in more than a century has been put on display at Sotheby's Bond Street headquarters in London ahead of it going under the hammer on June 29. The tennis ball size Lesedi la Rona, which weighs in at 1,109 carats and was found at Lucara Diamond Corp's Karowe mine in Botswana last November, is expected to sell for around $70 million. Reports suggest that the Lesedi la Rona, which translates as 'our light' in the Tswana language, has the potential to produce the largest top-quality diamond that has ever been cut and polished.

The sale of the Lesedi la Rona at an auction house is unusual since such stones are usually sold at tenders organized by the diamond miner which finds them. Lucara will be hoping that the prestigious sale at Sotheby's, which has already attracted huge international coverage, will enable it to realize a higher price than it could attain at a diamond industry tender by generating interest among a wide range of global investors and collectors.