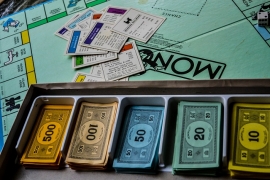 Five men who used Monopoly money to trick jewelers in a scam worth £7 million (around $10 million) have been sentenced to jail terms ranging from two to seven years in the United Kingdom. The men were found to have placed fake notes from the famous board game between real bank notes. The biggest loser was jeweler John Calleija who has a shop in the Royal Arcade on Old Bond Street in London who lost £6.1 million (approximately $8.5 million). Similar swindles were also carried out in Bristol and Leeds where the jewelers did not notice the fake notes until after the five fraudsters had fled with the goods.