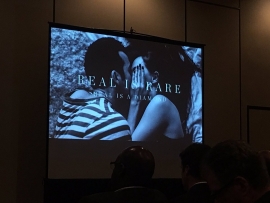 Charles Wyndham is left singularly unimpressed with the Diamond Producers Association (DPA) new slogan, as part of its marketing strategy, of ‘Real is Rare. Real is a diamond.’ It falls far short of the legendary ‘A Diamond is Forever’ slogan which hit the emotional value of diamonds and also the fact they are a store of value. But it also aims for the wrong target and even succeeds in missing that, he comments. "My assumption is that the key aim of this tag line is to combat the threat of synthetic, or as I would prefer [to call them] cultured diamonds. I simply do not think that the word ‘real’ hits the button, which I take to be comparing natural to cultured… for the benefits of the millenials… A cultured diamond is 100% a real diamond, just man made, as opposed to being made by nature.

"Secondly, I take issue with the word ‘rare’. In 2015 about 121 million carats of diamonds were mined, I won’t even bother to try to extrapolate into number of pieces but let's just say an awful lot. ‘Diamonds’ are not rare. However, some diamonds are extremely rare, and there are areas of diamonds that are most certainly rare. Whatever the hype the vast majority of ‘diamonds’ are not sold as being ‘rare’."

He comments that many jewelry shops, whether in Antwerp, London, New York or elsewhere, are located in somewhat seedy looking areas and sell goods in a discounted way that detracts from their beauty and their supposed rarity and that there is a "general distrust of the diamond industry" and a lack of transparency and this must be dealt with.