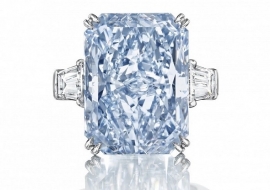 The 'Cullinan Dream' has taken over as the largest and most expensive fancy intense blue diamond ever sold at auction after going under the hammer at Christie’s New York Magnificent Jewels sale on Thursday for $25.3 million. Interestingly, however, after the high prices seen in recent auctions, the 24.18-carat cut-cornered rectangular mixed-cut gem sold at the low end of its $23 million – $29 million estimate. The diamond, set on a platinum ring flanked with classic baguette-cut diamonds, is almost 10 carats bigger than the 14.62-carat 'Oppenheimer Blue,' which set a world auction record of $57.5 million. The auction featured 260 lots and generated more than $42 million in sales.