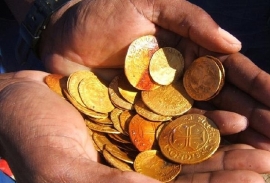 Namibian diamond miners working off the coast of Africa discovered a 500-year-old shipwreck loaded with around $14 million of gold and coins. The 'Bom Jesus' - or 'Good Jesus' - was first discovered along the Namibian coast near Oranjemund by geologists from De Beers in April 2008. It was found by the miners as they drained a man-made salt water lake along the Skeleton Coast. Although many shipwrecks have been discovered along the coastal area, this was the oldest and the first to be loaded down with coin and ivory tusks, according to the Mail Online.

They did not immediately find the treasure it contained, however. Initially, they discovered strange pieces of wood and metal along the beach, before discovering the shipwreck buried under the sand. And on the sixth day of work they found a treasure chest full of gold. It has been named as one of the most significant shipwreck finds of all time and the discovery led to the site being placed under the UNESCO Convention on the Protection of Underwater Cultural Heritage.

It was a Portuguese ship which set sail from Lisbon in 1533 and vanished, along with its entire crew, while on a voyage to India. It contained German copper ingots, West African ivory, Portuguese, Spanish, Florentine and Venetian gold and silver currency, weapons, including swords and knives, clothing, and skeletons. Archaeologist Dr Dieter Noli told FoxNews.com that the Namibian government will keep the gold. He said: "That is the normal procedure when a ship is found on a beach. The only exception is when it is a ship of state – then the country under whose flag the ship was sailing gets it and all its contents. And in this case the ship belonged to the King of Portugal, making it a ship of state – with the ship and its entire contents belonging to Portugal. The Portuguese government, however, very generously waived that right, allowing Namibia to keep the lot."