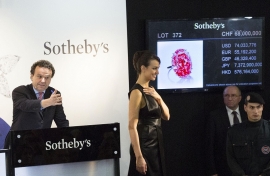 Sotheby’s has entered into a partnership with a manufacturer of large fancy colored and rare stones and a private New York jeweler for what is perhaps the world’s most valuable diamond, according to a report by Forbes. “Diacore and Mellen Inc. have acquired an ownership interest in one of the world’s natural treasures: the remarkable Pink Star diamond,” the auction house said in a brief statement distributed to a restricted number of people. “The three parties have formally partnered to achieve the value of the 59.60-carat stone, which Sotheby’s holds in its inventory.”

Diacore specializes in the manufacturing of large, fancy colored and rare stones. In the same statement, it said it was the original owner of the 132.50-carat rough diamond from which the Pink Star derived. Mellen Inc. is a third generation, family-run private jeweler based in New York. Neither the financial details nor information on what will happen to the oval-cut diamond were disclosed, however the auction house previously estimated the value of the diamond at $72 million. It remains the largest internally flawless, fancy vivid pink diamond ever graded by the Gemological Institute of America.

It was sold for a world record price of $83 million in Sotheby’s Geneva Magnificent Jewels sale in November, with the buyer, Isaac Wolf, saying he was representing a group of investors. But in February, 2014 Sotheby’s announced in its annual report that Wolf and his investors had defaulted on the sale. The auction house paid the diamond’s seller $60 million, which was the guaranteed price. The diamond remains in Sotheby’s inventory.