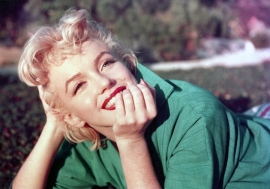 A Blancpain cocktail watch and its bracelet, set with 71 round diamonds and two marquise stones and once owned by Marilyn Monroe, is expected to sell for $80,000 to $120,000 at auction in November. A worldwide tour of a collection of Monroe's belongings started on June 1, which would have been her 90th birthday, with the vintage timepiece being the highest-valued item.

The pieces to be auctioned are from the estate of Lee Strasberg, the acting coach who was Monroe’s mentor. He and his wife, Paula, were close friends of the actress and received the watch and other items in her will after she died in 1962 and many of the items on offer are preserved exactly as they were when Monroe died of a drug overdose, according to Julien’s Auctions in Los Angeles which is overseeing the auction of more than 500 lots scheduled for November 19-20 in Hollywood. The auction house hopes the sale will generate from $2 million to $4 million.