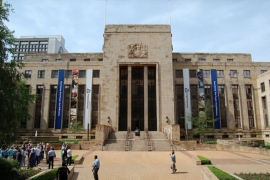 As De Beers prepares to move 300 employees from its historic offices at Charterhouse Street in London to a different site in the British capital to save money and allow it to sell off the buildings, could parent company Anglo American be planning a similar move in Johannesburg. Anglo owns four large buildings in Johannesburg, including the iconic 44 Main Street, the walls of which are covered with tapestries and Georgian etchings, reports miningmx.com. Pranill Ramchander, spokesman for the firm in Johannesburg, said: “Everything is up for consideration; we would consider it,”

However, De Beers faces different criteria for deciding a downsizing of its Johannesburg offices, since the mining giant holds a "founding-father position" in the city and also contributes towards the security of the city, according to the report. “They [Anglo] has to make some calls, especially when you changing the shape of the organization, change will inevitably occur. And you’re already seeing that. When you walk around the offices there, there are a lot of vacancies,” one source said. Of the four buildings in Johannesburg, it could probably move employees who survived the downsizing into two buildings.