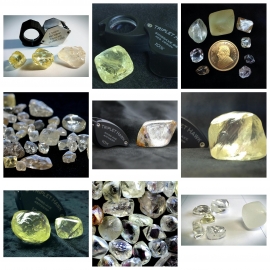 Canadian alluvial miner Rockwell Diamonds, operating in South Africa, published its results for the three and twelve months ended February 29, 2016, showing a 30% fall in annual revenues to $36.2 million (C$47.3M) from $52 million (C$68M) as rough diamond sales fell 34% to $28.85 million. This brings the company's losses for the year to $21.65 million (C$28.3M) as compared to $10.7 million in 2015, an increase of 101% as an official restructuring process was initiated, including Saxendrift operations nearing closure. "This quarter concluded a year that saw Rockwell repositioning itself fundamentally by reducing overhead costs, selling the noncore Tirisano asset outright, completing the closure of NJK, bringing Saxendrift closer to closure and acquiring two new mines with a third in construction," CEO James Campbell said in the operating update.

During the fourth quarter, Rockwell’s rough diamond revenue fell 35% to $7.8 million (C$10.2M). Total revenue decreased 39% to $8 million (C$10.4M) due to the exclusion of goods sourced from Tirisano contract miners and a decline in the per carat value of goods from Saxendrift as this operation comes to the end of its economic life." The statement also reads that Rockwell continued to implement key decisions flowing from the recent strategic and operational review. The new, de-layered reporting structure has already reduced ongoing overhead costs, and the deferred closure of Saxendrift is delivering substantial savings on the initially estimated closure costs. The Group has also repaid $6.1 million of long-term debt (relating to the Bondeo acquisition) over fiscal 2016.

CEO Campbell adds: "The results of the NJK closure, the reducing economics of Saxendrift and the underperformance of RHC impacted our working capital negatively during the year. A more favourable debt repayment mechanism negotiated for the RHC acquisition will improve our liquidity and allow us to invest in exploration and development projects in the months ahead. Looking at the year and the quarter, we recorded a significant improvement at a trading level. Our average cash operating cost continued to trend down by 18% to US$9.1 per m3 and improved carat recoveries over Q3 with better prices, coupled with the benefit of a weaker Rand, resulted in a reduction in operating losses in the quarter. In the months ahead, as construction progresses at Wouterspan and the additional in-field screening capacity at RHC stabilises, we will continue to scrutinise our mining efficiencies and address any residual process deficiencies and bottlenecks. Although we have not yet been able to achieve our strategic goal to process 500,000m3 of gravels per month from our MOR operations, we expect to be back at 350,000 m3 per month before the end of fiscal 2017. The diamond market is beginning to show signs of recovery thanks to a combination of midstream restructuring and supply constraints and it is our objective to be able to capitalise on these improvements as we deliver on our revised strategic objectives.”