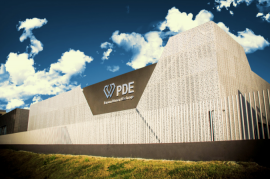 The Panama Diamond Exchange, Latin America’s first diamond bourse, will from now on be known as the “World Jewelry & Diamond Hub, Panama.”  The move was approved by the General Assembly of the World Federation of Diamond Bourses, during the 37th World Diamond Congress. The change was announced by the Panamanian bourse’s president, Mahesh Khemlani. “While the trade in diamonds is a principal component of the activity at our bourse, it is certainly not the only one,” he explained. “A large number of our members deal in jewelry as well, and there is also a very active trade in emeralds and other colored gemstones. We felt it was imperative that our name be reflective of the composition of our membership, and ‘jewelry,’ which is the sector of which we are all part, was added.”

The bourse is the anchor organization of the World Jewelry Hub, which is the only trading center in Latin America dedicated to the diamond, colored gemstones and jewelry trades. “As our status as the industry’s primary entry point and trading center in the region grows, we were keen to ensure that there be no confusion that the WJH and the bourse are inexorably linked,” Mr. Khemlani added. “Consequently we decided that the bourse should be called the “World Jewelry & Diamond Hub, Panama.”