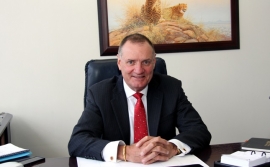 The World Federation of Diamond Bourses unanimously elected Ernie Blom for a third consecutive two-year term as president during the recent World Diamond Congress in Dubai, while Israel Diamond Exchange president Yoram Dvash was elected as vice president, reports The Retail Jeweller - India. Blom said he was delighted with the debates and decisions taken at the biennial meeting of the WFDB and International Diamond Manufacturers Association (IDMA). The three-day congress presented the opportunity to discuss at length issues affecting the global diamond industry under the themes of 'Transparency, Responsibility, Sustainability'. "There was an excellent atmosphere and a positive feeling that change for the better is happening after a difficult past year", said Blom. "I was delighted with the deep level of commitment and seriousness. The delegates are very concerned with the state of the industry and were determined to debate issues fully. This enabled us to make decisions based on a full airing of the views of our members," he added.

The main themes on the agenda were challenges of financing, price lists, synthetics, the policy of producers, supply chains and traceability, anti-money laundering, transparency in business, and tenders, as well as other issues. The WFDB also created an international Young Diamantaires group, whereby a group of younger members of diamond firms from the main diamond centres, including Israel, India, Belgium, the United States and South Africa as well as Australia, will communicate on a regular basis. The aim is to provide mutual encouragement regarding the challenge of leading the diamond industry into the future, as well as a platform for the discussion of relevant issues for the mutual benefit of members. "We have a huge amount of which we can be proud. I stressed that rather than being on the defensive, we should rather go on the offensive in showing our deep commitment to working transparently", said Blom. "How many other industries have taken the steps that the diamond industry has taken over the last 15 years to prove its commitment to making its operations visible to all and with a concern for the people who mine those diamonds in difficult conditions? The answer is very few, if any."